NJ.com reported the tragic case of Anna Burkhart who developed a large, painful and deadly bedsore while in the care of staff at Oradell Health Care Center.  Burkhart was accepted by Oradell after she suffered a fractured right hip on Oct. 30, 2015.  Oradell either failed to notice or ignored the bedsore as it developed and grew.

Burkhart was kept in a hospital bed in Oradell for 100 days – until her insurance ran out.  Then Oradell discharged the woman, the family brought her home and discovered she was suffering from the sore on her sacrum or lower back.

They rushed her to the hospital, where doctors determined the bedsore, called a Stage 4 decubitus ulcer, had festered for so long that Burkhart had developed fatal sepsis.

“There was inadequate staff supervision, understaffing and the intentional underutilization of critical services,” the lawsuit states.

According to the complaint, Foley was a resident from Sept. 3 to Sept. 24, 2016. The plaintiff alleges that during her short stay there, Foley suffered from avoidable pressure ulcers, infections and dehydration causing her wrongful death on on May 7, 2017.

The plaintiff contends that Defendants neglected Foley including failing to monitor Foley’s condition and failing to timely provide the services to prevent her ailments.

The Times News reported the lawsuit filed against White Oak Manor and White Oak Management for neglect of a wound after an amputation—larvae and maggots were growing in his body and he lost his remaining leg.

William Brooks was admitted to Burlington’s White Oak Manor on May 5, 2014, while recovering from an amputation below the right knee.  That July, after an infection sent him back to the hospital, Brooks had doctor’s orders for frequent cleaning and redressing a wound on his remaining foot. According to the suit, there was no record of that treatment being done in June or July of 2014.

A doctor was called in to evaluate Brooks when maggots were found in the wound on his left ankle. He was treated, but he ended having his left leg amputated below the knee.

The suit claims White Oak Manor and its staff were negligent in caring for Brooks, and he suffered physically, emotionally, financially and was disfigured because of it.

The Waco Tribune reported that a jury found that Jeffrey Place Rehabilitation Center officials were negligent in their care of a blind, diabetic Waco man and compensated the man’s family $450,000 in actual damages. Homer Byrd, a 79-year-old retired tractor mechanic, died in November 2015, only a month after being admitted to Jeffrey Place.

Jurors deliberated about 7½ hours over two days before siding with Greg H. Byrd and his wife, Kim, in their wrongful death lawsuit against the Waco nursing center and its parent company, Senior Living Properties LLC.

Testimony from the five-day trial showed that Byrd, a diabetic on dialysis, developed an infected big toe that turned gangrenous, which led to Byrd’s right leg being amputated just above his knee and, ultimately, to his death.

Jeffrey Place staff breached the ordinary standard of care by failing to promptly discover and treat the infected toe. Nurses testified they noticed the toe, but not until the wound had turned black, had a foul odor and was 4 centimeters by 5 centimeters.

“Due to the evidence we saw, it was just gross negligence,” juror Crocker said. “There was a lot more that could have been done for this man, and it was just absolute refusal to see a problem that is blatantly obvious.”

First Cost News reported the tragic and preventable neglect of Annie Hurley at San Jose Health and Rehabilitation Center.  Annie was transferred to the hospital with a large infected Stage 4 pressure ulcer and a fever of 104.  Annie’s daughter, Paris, questions the level of care her grandmother was given at the nursing home.

“The way the sore looks is awful,” says Paris Hurley. “It’s almost like her body is rotten.”  She adds there’s no way the staff there could’ve missed the huge sore – not just based on its size, but also the visceral smell. It was so ugly, Paris explains, the Emergency Room doctor was stunned.

“He said this is the worst case he’s ever seen in his life,” Paris says.

Family members tell First Coast News they went to the San Jose nursing home with pictures of the sore and showed the director.

“And she had no response,” Paris says.

Family members maintain she deserves the best of care and now they don’t believe she received it.  “We trust the caretakers, the nurses, to take care of our family members every day and they don’t,” Paris says.

The Casper Star Tribune reported the settlement between SavaSeniorCare d/b/a Poplar Living Center and resident Gilbert Arellano.  The lawsuit involved a facility employee driving a van into the blind resident standing near the curb waiting for a ride in March 2014. Arellano was knocked to the ground, and injured.  The nursing home did not have someone stand with Arellano while he waited for his ride on the handicap ramp and the man was unable to avoid the danger himself because he is legally blind, the suit says. The suit alleges the facility failed to meet the legal standard of care because it is understaffed, did not accompany Arellano to the curb and allowed an employee to “negligently operate” a company van.

Since the incident, Arellano has had pain and numbness in his right arm.  The amount of the settlement reached on Nov. 1 could not be disclosed because of a confidentiality agreement.

The suit also alleges that SavaSeniorCare, the company that owns the Casper nursing home, kept staff numbers low and didn’t adequately train employees to save money, thus endangering the residents. That allegation is repeated across many of the other lawsuits. The Centers for Medicare and Medicaid Services also cited Poplar Living Center for understaffing the facility.

According to its website, SavaSeniorCare operates more than 230 nursing homes across the country, including two more in Wyoming: Cheyenne Healthcare Center and the Sheridan Manor.

“The nursing home’s settlement was the most recent conclusion to six wrongful death or personal injury lawsuits filed against it in the last six years. Repeated inspections by the Centers for Medicare and Medicaid Services also detail a pattern of understaffing, improper care and unsafe building conditions.”
The facility is on the Special Focus Facility list that needs close monitoring because of a “history of persistent poor quality of care.”   Inspection records show a pattern of the for-profit Sava nursing home failing to employ enough staff to keep residents safe, take care of residents who showed signs of depression and investigate complaints of neglect.
Improper wound care is repeatedly cited in the reports. The presence of pressure ulcers is an indicator of neglect and short-staffing.  One resident arrived at the facility in January 2015 without any wounds but developed open sores on her buttocks and legs in March.  The nursing home administrator told inspectors in January, “I’m nowhere near where I want to be in terms of staffing,” according to the agency’s Jan. 15 report.  According to a March 2015 report, there were many nights where only one nurse and one nurse’s assistant were in the building to care for more than 100 residents — many of whom require assistance to use the bathroom and navigate other simple tasks.

The reports repeatedly note that the nursing home fails to adequately record, investigate and resolve complaints about living conditions.  Residents who needed help using the bathroom reported they often waited long periods of time — sometimes up to eight hours — before they were taken to the restroom. One resident wandered the halls of the facility just after 8 p.m. March 29, 2015, with urine-soaked pants for at least 25 minutes before being helped.

Residents also told inspectors that the food served was inedible. A district manager who sampled a meal of steak and noodles also said the food was “not palatable,” according to the reports.

Families of previous residents have sued Poplar Living Center at least six times in the past six years alleging that negligence led to the death and serious injury of their loved ones. The nursing home settled four of those suits for undisclosed amounts and one is still ongoing.

Sepsis is a Medical Emergency

McKnight’s had a great article on the Centers for Disease Control and Prevention’s recent report on sepsis in Vital Signs.  Sepsis is a complication caused by the body’s overwhelming and life-threatening response to infection. It can lead to tissue damage, organ failure, and death. Sepsis is a medical emergency.

Many clinicians are missing the signs of sepsis according to the Centers for Disease Control and Prevention.  In a Vital Signs report published, the CDC found that 7 out of 10 people with sepsis had either recently used healthcare services or had chronic diseases that required frequent medical care. Nearly 80% of patients develop sepsis outside of the hospital setting.

Those statistics mean healthcare providers play a “critical role” in recognizing sepsis early on, and protecting people from infections that can lead to the condition, the CDC said. That role is even bigger for long-term care providers, since adults age 65 years and older and those with chronic medical conditions are more likely to get sepsis.

“When sepsis occurs, it should be treated as a medical emergency,” said CDC Director Tom Frieden, M.D. He urged families, doctors and nurses to watch and ask “could this be sepsis?”

The CDC urged providers to follow infection control requirements, educate patients and families about sepsis, act fast if symptoms are identified and know the signs and symptoms.

The agency is also taking steps to increase awareness of sepsis among clinical professionals, aligns infection prevention, chronic disease management and antibiotic use, and develop sepsis tracking programs to measure the impact of successful interventions. 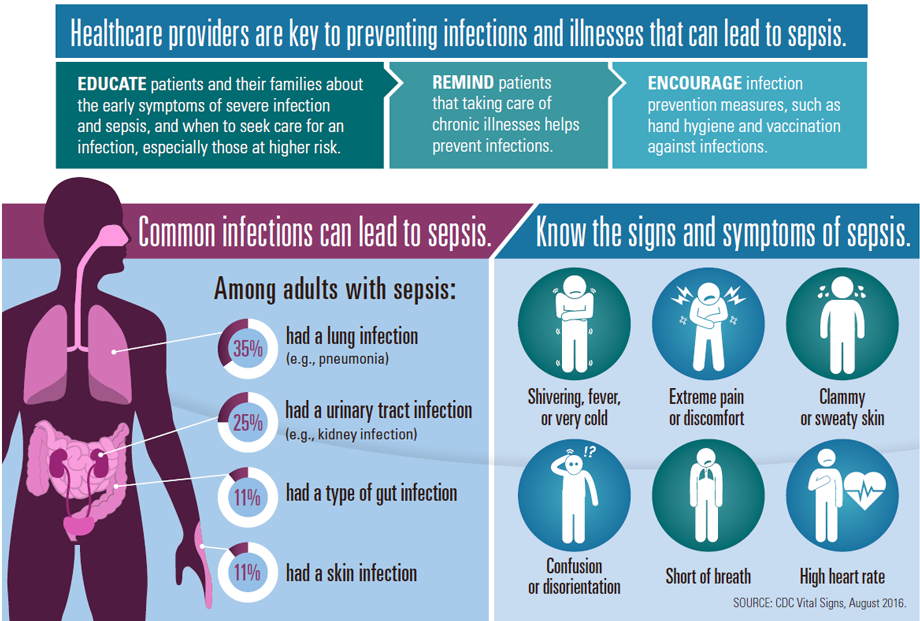 Rotting Foot is Evidence of Neglect.

RightWingNews reported the disturbing story (and disgusting photos) of a nursing home resident.  The sickening story of neglect was reported about a woman in the care of Landsdowne Care Home.   Anahita Behrooz discovered that her 91-year-old mother, Mahbubeh Ghadimabadian, was being terribly mistreated.

The daughter explained how the staff didn’t turn her mother over nearly enough, and this did end up causing terrible and painful bedsores. The most disgusting part of this case of neglect is that the poor old woman’s foot was literally rotting away and definitely did not receive the proper medical attention.  Hit the above link to see video and photo.

Beachwood Pointe Care Center nursing home and its parent company, Provider Services, will pay $1 million to the family of a resident who died due to the facility’s “negligence and recklessness,” including infected pressure ulcers, a judge ruled. A jury in Cuyahoga County Common Pleas Court awarded Stevens’ estate $560,000 in punitive damages and $440,000 in compensatory damages.

Mary Stevens, a 71-year-old resident, died in 2012 following injuries caused by staff negligence, according to a lawsuit filed by her estate. Stevens also suffered from infected pressure wounds, and sustained “severe” and “fatal” injuries while living at Beachwood Pointe, the lawsuit claims.

According to the lawsuit, the Stevens’ family and physician were never notified of her injuries, and she was “not provided with a safe environment” prior to her death.