The Wall Street Journal had an interesting article about surgical errors in hospitals.  Surgery can be risky by its very nature, and the possibility of error or negligence makes it even more so. According to an analysis last year in the journal Patient Safety in Surgery, 46% to 65% of adverse events in hospitals are related to surgery, especially “complex” procedures.  Procedures are still performed on the wrong body part and surgical tools are sewn up in patients.

The consequences of surgical error are huge, both for patient health and hospital finances. A 2012 study by researchers at Johns Hopkins estimated that there are 4,082 malpractice claims each year for “never events”—the type of shocking mistakes that should never occur, like operating on the wrong body part. In nearly 10,000 cases studied, which took place from 1990 to 2010, never events led to death in 6.6% of patients, permanent injury in 32.9% and temporary injury in 59.2%. The total payout in those cases was $1.3 billion.

“Given all of the current technology, strategies and tools that are available to prevent these occurrences, it is unacceptable that foreign objects are still being left in surgical sites and that wrong-site surgeries are still occurring,” says Lisa Freeman, executive director of the nonprofit Connecticut Center for Patient Safety.  Many hospitals are participating in the National Surgical Quality Improvement Project, or NSQIP, overseen by the American College of Surgeons and adapted from an effort at Veterans Administration hospitals that helped decrease postoperative death rates by 47% from 1991 to 2006. “All too often, patients are being harmed by preventable complications,” says Clifford Ko, a colorectal surgeon at UCLA and director of NSQIP. Many hospitals don’t collect reliable data on their own adverse events, and “you can’t improve a hospital’s surgical quality if you can’t measure it.” 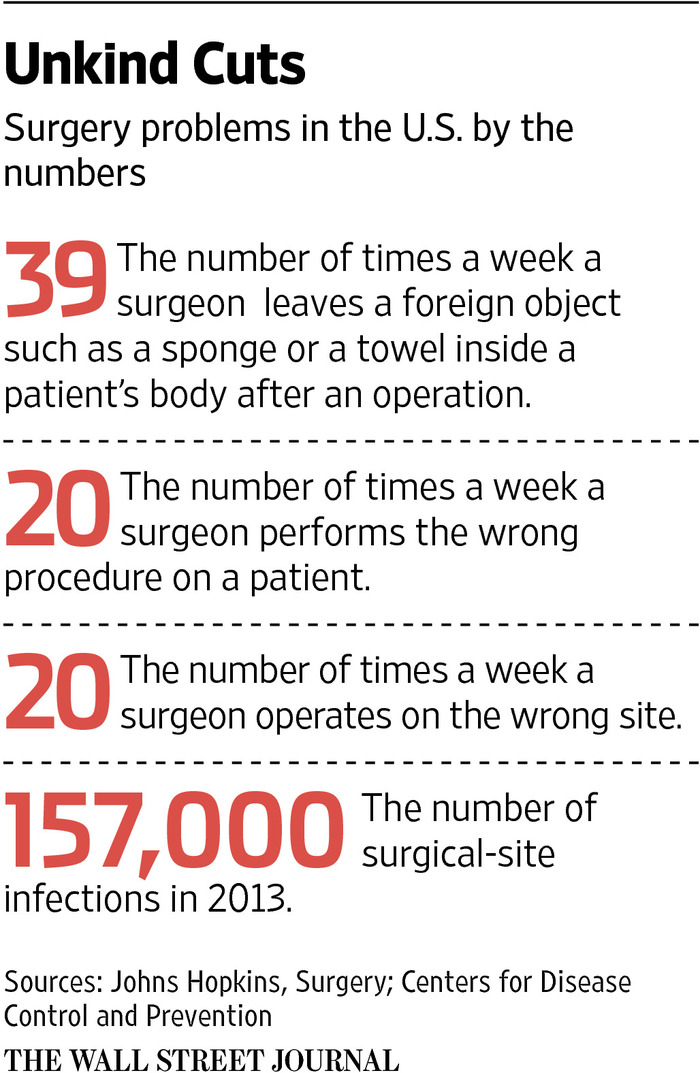 There’s also a movement afoot to change how some surgeons behave. Often seen as the rock stars of medicine, surgeons can be hard to rein in, resisting efforts to conduct preoperative briefings and being dismissive and curt if not downright intimidating to underlings. According to a study in the American Journal of Surgery in January, they are the specialists most commonly identified as “disruptive physicians,” and their outbursts can shift the focus away from the patient and lead to increased mistakes during procedures and diminished respect from colleagues.