South Carolina passed the 70,000 confirmed cases mark today with over 1200 confirmed deaths.  Total coronavirus deaths in the U.S. will surpass 150,000 by this weekend. But the Trump administration is against a proposal from Senate Republicans to spend over $50 billion on programs at the Centers for Disease Control and Prevention, the National Institutes of Health, the Pentagon and the State Department aimed at virus testing, distributing a potential vaccine and otherwise confronting the pandemic.

President Trump said that the rising number of U.S. deaths from the coronavirus “is what it is,” defended his management of the pandemic with dubious and obviously false claims. In an interview with Fox News, Trump incorrectly claimed that the United States had the lowest death rate in the world; that new cases were surging here because of the number of tests conducted; and that his virus response had saved “millions of lives.” He is delusional. 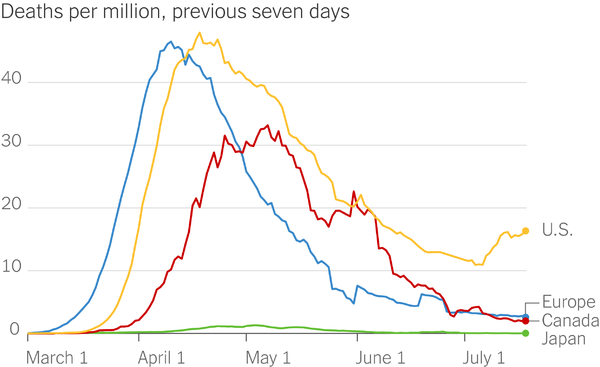 Most developed and high-income countries have a relatively small number of new cases and deaths each day, while the U.S. is climbing up the charts: 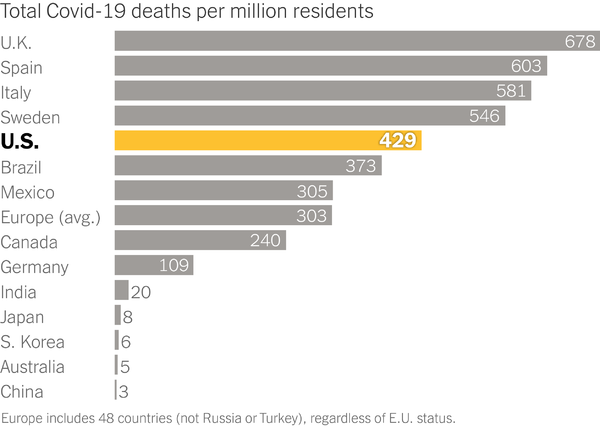 A higher percentage of tests are coming back positive than in other countries, and the death toll continues to mount, which are both signs that the main issue in the U.S. is a failure to control the virus.  Wear a mask! Stay safe.